Number 3 has many cultural references.Different cultures across the world identify 3 as a strong and influential number.Given below are number 3's different cultural usages and its importance in their belief.

Africa Ashanti  : the moon goddess is three people, two black, and one white.

Arabian, Pre-Islamic  : the Manant is a threefold goddess representing the 3 Holy Virgins, Al-Itab, Al-Uzza, and Al-Manat. They are depicted as aniconic stelae, stones or pillars, or as pillars surmounted by doves.

Buddhist  : tradition the theme of 3 is represented by, The Tri-ratna, The Three Precious Jewels, and the Buddha, Dharma, Sangha.

Celtic : Bridgit is threefold; there are the Three Blessed Ladies and innumerable Triads, often a threefold aspect of the same divinity.

Christianity : Three represents the Trinity, the soul, the union of body and soul in human in the church. There were three gifts of the Magi to Christ as God-King-Sacrifice; three figures of transformation, temptations, denials by Peter (one of the 12 Apostles--- 12=3 (1+2=3). There were 3 crosses at Calvary, He died on The Hills, there were 3 days to the death process for Christ, and there were 3 appearances after his death. There were 3 Marys, and there are 3 qualities or theological virtutes being Faith, Hope, Love or more commonly known as Charity. The number 3 gives to the meaning the embracing Godhead - Father, Mother, Son/Daughter.

The opening line of the Emerald Tablets of Thoth,The Atlantean

Table 11
Three is the mystery, come from the great one,
Hear, and light on thee will dawn.
In the primeval dwell three unities,
Other than these none can exist.
These are the equilibrium, source of creation,
One God, One Truth, One Point of Freedom.
Three come forth from the three of the balance,
All Life, all Good, all Power.
Three are the qualities of God in his light-home
Infinite Power, Infinite Wisdom, Infinite Love.
Three are the circles (or states) of Existence:
The Circle of Light where dwells nothing but God,
and only God can traverse it,
The Circle of Chaos where all things by nature arise from Death,
The Circle of Awareness where all things spring from Life.
All things animate are of three states of existence,
Chaos or death, liberty in humanity, and felicity of Heaven.
There is an ancient wisdom that's says; 'Messages or events that come in three's are worth noticing. 'Whenever anything is mentioned three times it is a witness to us that these things are of utmost importance.
Three symbolizes manifestation into the physical. It is the triangle - pyramid shape in the vesica pisces - see image below.
The TV Show 'Charmed' deals the 'Power of Three Sister Witches', known as the Charmed Ones. Their job is to vanquish evil forces in their many forms and sometimes non-forms.

The above symbol, called a Triquetra (tri-KET a Latin word meaning 'three cornered') appears on The Book Of Shadows.an ancient book of spells that assists these 'Charmed Ones' in dealing with the evil forces they are continually encountering. In some episodes so called evil and good must work together to bring balance to a situation. They cancel each other out in the end - poof - gone - disappeared!
A powerful confirmation occurred as we walked back along the trail, unexpectedly encountering a huge grandmother tortoise seemingly waiting beside the trail to greet us. That's when I knew I was to share about the 'Power of Three' for those who may feel inspired to consciously work with this powerful element of sacred geometry.
'Power of Three' has to do with Alchemy. The Egyptian god Thoth or the Greek Hermes Trismegistus (Thrice Blessed or Thrice Great) are the progenitors of the Emerald Tablets describing the mysteries of Alchemy. The alchemy of three is demonstrated by its power of multiplicity. For example, in understanding the numbers - One gave rise to Two (1+1=2) and Two gave Rise to Three (2+1=3) and Three gave rise to all numbers (3+1=4, 3+2=5, 3+3=6, 3+4=7, 3+5=8 3+6=9). Thus in addition to being a number of good fortune, Three is also the number of multiplicity and alchemy among other things.
Many believe the Triquetrais an ancient symbol of the female trinity, because it is composed of three interlaced yonic Vesica Pisces (a.k.a. PiscisSLatin for "Vessel of the Fish") and is the most basic and important construction in Sacred Geometry, which is the architecture of the universe.
A Vesica is formed when the circumference of two identical circles each pass through the center of the other in effect creating a portal. 'The Triquetra' represents the 'Power of Three' or the threefold nature of existence i.e. body, mind and spirit; life, death and rebirth; past, present and future; beginning, middle and end; Sun, Moon and Earth; and the threefold co-creative process described as thought, word, and deed. 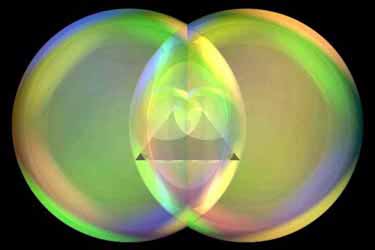 Sphere=ovum
Vesica Pisces - Oval opening of the penis
The creation process as described in the Vedas is unfolding, maintaining, and concluding as in birth, life and death. There are innumerable trinities and triads throughout myth and religious traditions, such as the triple goddess; maiden, mother, crone. One example in Greek mythology is Kore, Demeter, Hecate. The Christian trinity is Father, Son and Holy Ghost. Vedic trinities include Brahma, Vishnu and Shiva with their consorts Saraswati, Lakshmi and Kali to name just a few.
I have often referred to triple planetary and celestial alignments as a Triune Council. This month we have several Triune Councils including the important Venus retrograde in Scorpio that will join up with Mercury and the Moon. Scorpio is the archetypal sign of the powerful Sorceress Witch (the crone aspect also linked with Kali, Hecate, Pele, the Cretan Snake Goddess, Cerridwen and all the goddesses linked with death and rebirth).
Her job is to align with divine will for the purpose of commanding life force energy so powerfully that she is fully the mistress of magic and manifestation generating ecstatic life experiences through the Shamanic Process of death and rebirth. It is worth noting all the Triune Councils that occur regularly 'Above and Below' as they energize the 'Power of Three.'
When we are seeking direct experience of these energies we can then work with them more consciously. If you feel inspired by and connected to the 'Power of Three' it may be worthwhile to experiment with gathering in groups of three with a common intent and then invoke the Power of Three and notice what happens. This just may be one simple key to planetary transformation utilizing the Power of Three to catalyze the alchemy of our world into the fully embodied, living experience of Heaven on Earth.

Greco-Roman: Fate, the Moirai, who are three-in-one as Moira; Hecate is three-fold; the Erinyes are three-in-one as Erinys, as are the Gorgons as Medusa. There are three charities, graces. There are 3 sirens, Horae, Hesperides, Graiai. Cerberus is a triple-headed and Scylla has a 3 bitch tail. The Chimera has a three part body. Three, four and their sum, seven are sacred to Aphrodite/Venus as queen of the three worlds and four elements. Orphic symbols has the triad of Being, Life, Intelligence.

Hebrew three is symbolized by Limitless Light; sanctifying intelligence. In the Kaballah three represents understanding and the trinity of male, female and uniting intelligence.

Hindu : The Trimurti, the triple power of creation, destruction, preservation, of unfolding, maintaining and concluding. There are various trinities of gods. The moon chariot has three wheels.

Japanese : The Three Treasures are, Mirror, Sword and Jewel--that being Truth, Courage and Compassion.

Maori : the Great Spirit, the Divine Creator, is a trinity of sun, moon earth, the god of nature, of past, present, and future. It is mind, character, physique symbolized by three raised fingers.

Mexican: the Trinity is represented by three crosses, one large, two smaller.

Scandinavia : Fate as the Three Norns, Mani, Nyi and Nithi, who denote the full, new, and waning moon.

Teutonic mythology : the moon is Fate, and Holda, the lunar goddess, is trine with her two daughters. Thor is sometimes depicted with three heads and the triskele is a symbol of Odin/Woden. Three is the number of good fortune. In Carthage, the Great Goddess, as lunar, is represented by three aniconic pillars.

Slavic : The moon god is triple-headed.

Taoist : The Great Triad is Heaven-Man (Human)-Earth. Three is the strong number in Taoist symbolism because it is the center point of equilibrium.

Posted by BASIL THANKACHAN at 6:24 PM No comments:

Post #11- Number 3 and its various relations with our lives

3 is a number which has meaning of  stability.We have many examples in our own lives that emphasize the importance of number 3.Cited below are the connection of 3 and its relations with our lives.


The third dimension - we do things in threes so they will manifest in our physical realm.
It's roots stem from the meaning of multiplicity. Creative power; growth. Three is a moving forward of energy, overcoming duality, expression, manifestation and synthesis. Three is the first number to which the meaning "all" was given. It is The Triad, being the number of the whole as it contains the beginning, a middle and an end.
The power of three is universal and is the tripartide nature of the world as heaven, earth, and waters. It is human as body, soul and spirit. Notice the distinction that soul and spirit are not the same. They are not. Three is birth, life, death. It is the beginning, middle and end. Three is a complete cycle unto itself. It is past, present, future.
The symbol of three is the triangle. Three interwoven circles or triangles can represent the indissoluble unity of the three persons of the trinity. Others symbols using three are: trident, fleur-de-lis, trefoil, trisula, thunderbolt, and trigrams.
The astral or emotional body stays connected to the physically body for three days after death. There is scientific evidence that the brain, even when all other systems are failing takes three days to register complete shutdown.
There are 3 phases to the moon. Lunar animals are often depcited as 3 legged.
Three is the heavenly number, representing soul, as four represents body. Together the two equal seven (3+4=7 ) and form the sacred hebdomad. The 3x4=12 representing the signs of the Zodiac and months of the year.
Pythagorean three means completion.